Fable II is an action role-playing game set in the medieval fantasy world of Albion. It welds the simple action of a game like Viking: Battle for Asgard and the character interactions of The Sims to an RPG structure that plays like a hugely simplified and truncated version of Elder Scrolls IV: Oblivion. That isn't to say it's a bad game. It's a lot of fun, the art design is wonderful, and the voice work is excellent (in particular that by Stephen Fry, who should play evil more often).
Tweet 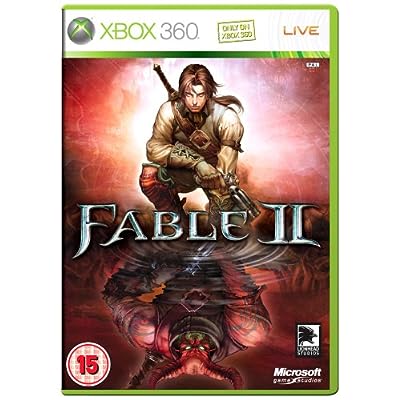 But it’s underwhelming, far too short, and anticlimactic. You spend most of the main quest gathering the three other great heroes of the age, but once you’ve pulled them together they help you in one big battle and that’s pretty much it for them. You’re left with the feeling that you could probably have sorted everything out without their help. And once that’s done, the game pretty much dribbles away.
Oblivion, on the other hand, had several separate quest threads, some of them nearly as substantial as the main story. What quests there are in Fable II lack variety (as do the clothes, weapons, people and creatures) – nearly every mission is simply a matter of whacking a few baddies with a weapon. Never mind Oblivion, Fable II is substantially shorter than even Mass Effect, and even then it’s padded out by collectathons and chores. A few days in, and even the holiest of heroes may find themselves trying to persuade their wives into a menage a cinq, just to give themselves something to do.
The game world is described as open, but it’s actually very limited – the landscapes are beautiful, but you’re nearly always restricted to narrow pathways. There is very little of the joyous bounding across the landscape that characterises a truly open game world. That’s reflected in the maps – a series of tiny, discrete discs that are pretty much useless for anything.
Its biggest strength, aside from offering an accessible role-playing experience to newcomers to the genre, is probably that it really does feel like role-playing. In many RPGs the main character is little more than a cursor that you move around the screen. To an extent that’s true of your avatar in this game (the customisation options are very limited), but what truly takes you into the role is the interaction with other characters (silly as it can be), and especially with your family. Playing as a female character, I picked up a husband quite early on; you realise the game has something special to it once find yourself thinking, ‘I must go and see my husband’ or ‘Why isn’t my husband wearing the new shirt I gave him?’
But its most innovative elements are also its most ludicrous – you can walk up to almost any stranger, and (as long as they swing the right way) you can get a proposal of marriage out of them after five minutes of farting, whistling and sock puppetry. You can take a job to pay the bills, but a well-qualified bartender can earn enough in a single night to buy the entire pub. You can get married, but even if your spouse is ready to divorce you for a lack of sex you will struggle to do anything about it until you buy a special book which teaches you how to say ‘Come back to my place’. You carry on earning rent from the properties you own, even when the Xbox is off – but as a result the best way to progress is often to stop playing!
The game is already notorious for some of its bugs. (Listen to the abbot when he’s talking to you – if you don’t the game is said to break entirely!) I was hit by only one, but it was a heartbreaker: my daughter wandered into a dangerous cave, but wouldn’t follow me out, and when I tried to go back in to get her the mission reset. After several attempts I had to leave her there to be feasted on by goblins, after which the game criticised my parenting skills. I still haven’t been home to face my husband. (Though my three wives have been very consoling, both individually and in concert.)
Overall, a great rental: it’s good fun, but you’ll have seen most that it has to offer after a week or so of playing it.
Tweet