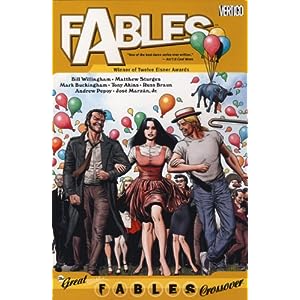 Once upon a time in a land nor far from our own familiar fairy tales, there was a wizard writer called Bill Willingham who re-imagined a world where fairy tales characters were real. They fell in love and bickered, fought and schemed, laughed and cried. Snow White married the big bad Bigby Wolf, Likewise Beauty tamed the Beast. King Cole became the Mayor whilst little Jack Horner no longer sat in a corner but as Jack Of All Things seduced every woman he met. But Rose Red has fallen into a depression with the death of Boy Blue, just as their beloved New York City base was destroyed. So Mr Willingham went in search of Matthew Sturges, and together they chose to chronicle their next epic adventure where their whole reality was threatened, a story so vast it took combined issues of Fables and Jack of Fables to tell it from beginning to end.

Who should enter the pages of this playfully witty comic book saga but the big bad Kevin Thorne who plans to rewrite the whole of our beloved heroes’ history and start all over again. With the help of his devious team of henchmen, the literary genres Noir, Western, Romance, Science Fiction, Literature, Blockbuster, Horror and Comedy, he plans to rework the Fables in his own image. So our merry band of fairy tale folk go on a deadly quest with Kevin’s father, Gary the Pathetic Fallacy and his son, the prematurely aged Mr Revise, to stop the villainous scribe from murdering his brother Writer’s Block, and taking all of Fableland with him. But can Bigby Wolf’s plan work when he’s forcefully transformed into a chimp, then a pink elephant, a donkey and finally a bad-tempered little girl? Will they manage to save the day or will all be lost?

Mr Willingham brings his own troupe of happy-go-lucky helpers with him, his words like the Pied Piper’s flutes attracting a whole host of nimble fingered followers with the colourful names of Mark Buckingham, Ross Braun, Tony Akins, Andrew Pepoy, Jose Marzan Jr and Dan Green. With the swift touch of pen and ink, followed by a dusting of colour, they give shape to the crossover extravaganza. Together they tell a witty highly original tale that speeds along with the speed of a flying horse. With Bigby’s absurd transformations and Jack’s serial womanising, what a mischievous sense of humour that Mr Willingham has. Equally, by playing around with the logics of storytelling, he’s also giving thought to the building blocks of how stories are told or reinvented. Whatever the outcome of the adventures to come, we can be assured that all are destined to live happily and dysfunctionally ever after.