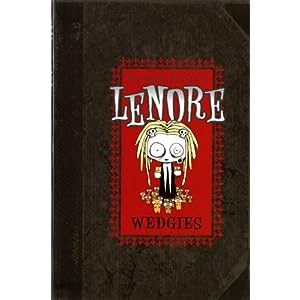 The simplicity of Dirge’s drawings play mischievously with these childlike stories that inhabit the darker recesses of a playfully warped imagination. He goes scavenging around the darker corners of cobwebbed attics or deserted graveyards introducing us to her playmates such as Ragamuffin, Taxiderm, and Mr Gosh. He also subverts the activities of those childhood favourites the Easter Bunny and the Tooth Fairy, so you’ll never want a choccy egg or want to lose a tooth ever again. Lenore would be at home in Tim Burton’s surreal worlds and could be neighbours with Neil Gaiman’s Coraline.

Named after Edgar Allen Poe’s poem, she steps out of his shadows and confidently walks in the footsteps of classic gothic literature as well as the subversively grotesque pleasures of Fungus the Bogeyman or the grim tales of Roald Dahl. The adventures of Skin-less, Mr Chippy, the fugly duckling, Samurai Sloth, and the Last Dance of the Lady Bug are not-quite fairy tales that out grim the Grimm Brothers. Perhaps it’s no surprise that her stories are now being prepared for the big screen. Whether your reading Wedgies in the blazing sunshine or the baleful light of the full moon, you will fall in love with Lenore. ****