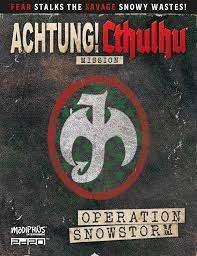 With so much focus on the European front, that World War 2 was a global affair often feels a bit taken for granted. Modiphius brought the conflict to Western Canada (British Columbia) with the Achtung! Cthulhu 2d20 mission, Operation Snowstorm. Set in the Canadian Rockies, players will navigate their way through a treacherous blizzard to investigate problems at a remote research outpost. Sounds simple, right? Just about anyone would love a scenic hike through Canada’s wilderness. The rustic terrain is as inviting as anyone might want, but looks can be deceiving.

This is a one-shot, and from the start, to finish it is compact and directed. Just glancing over the maps shows the writers kept this adventure focused. In the research facility, each floor is limited to only a few rooms and corridors, but this is where most of the action is. Every increment in the map feels like they took it into consideration, which maximizes the tense atmosphere, as well as the difficulty. From a design standpoint, this is a success.

As much as there is to like about this one, it would have been nice to have a couple more tables to minimize preparation for whoever is running the show. This is especially true towards the mission’s conclusion when the players are trekking into the mountains again, and are beset with encounters that will slow them down. The openness of gameplay is nice, but adding a few more tables similar to the “Climbing Mishaps” table earlier in the mission, to use one example would have helped time-strapped GMs

This is a tough, but quality one-shot that will put even veteran players through their paces. It would have been helpful if there were a bit more content for GMs. This adventure is of good value and gives a broader perspective of WW2. For players that aren’t afraid of rolling up new characters, this is one to check out.