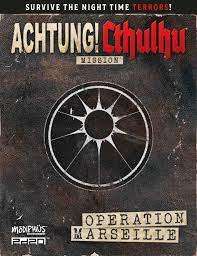 A race against time in three acts to stop Black Sun Agents from completing a ritual in the French city of Marseille. Section M  must try to stop the creation of a weapon that is powerful enough to affect an entire city. Modiphius offers a tense one-shot for Achtung! Cthulhu where players are asked save the world from Nazis seeking to unleash unholy terror upon the world.

This mission will be challenging simply because the players will be up against the clock, and the PCs are thrown into action immediately. Conflict is more than just exchanging fire with the enemy in this adventure, which includes bizarre hallucinations and tough situations that aren’t steeped in combat.  Additionally, Operation Marseille offers a lot of freedom for the players as they make their way through the city. People that enjoy something a bit more “sandbox-like” will appreciate the design.

Production values are high in this full-colour mission, although there isn’t much art. However, there are some very well-made handouts in the appendices.  It’s also worth adding that this is a quick, easy read for gamers short on time.

What stands out is the pressure of needing to complete the objective within a time limit, but I felt the mission could have held the knife to the players’ throats even more. Beyond a single scene in act 2 where Black Sun Agents come after PCs or the toten in Act 3, the PCs aren’t always under threat. Even as an optional rule, NPCs rather than narrative suggestions, could have been dedicated to hunting and harassing the PCs from the very beginning. No matter how things play out, what this doesn’t have in shoot’em up encounters, it has tension. Can the PCs make it before the sun rises? What happens if they don’t? Will a weapon capable of affecting an entire city be created?  The players’ biggest enemy is time, though this should be enough, it could have been even more challenging than it currently is. Regardless, if you want a one-shot that doesn’t just build up to a big fight at its conclusion, then this is a good choice. It offers different playing styles a chance to shine because it’s a module that isn’t necessarily oriented around fighting. In the hands of a good gamemaster, Operation Marseille could be a ton of fun.