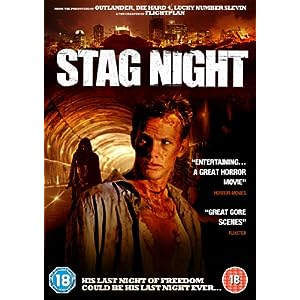 Stag Night, out this week from Kaleidoscope Home Entertainment, is a film steeped in horror history. It would have you think it’s where Death Line meets The Hills Have Eyes, and begins with a scene reminiscent of An American Werewolf in London’s Underground encounter.

Picture that classic scene in your head: the panicked commuter, running for his life…

Stag Night is relentlessly average, except for when, as above, it’s just rubbish. Loose editing leaves the characters – four obnoxious dudes and the girls they harassed on a train – standing still for an eternity when faced with danger, as if they can’t decide whether to run away or wait where they are to be murdered. The plot is reliant on their stupidity, not least when they find themselves in a room full of weapons and leave without taking any of them.

At one point the survivors encounter a community of homeless people; surely the point at which the film would have something worthwhile to say. The roles now reversed, would the homeless people show greater humanity than our heroes would when passing them on the street, or would they say “Sorry, not now” and walk off ignoring them? The answer was neither; the film really did have nothing at all to say.

It’s a mystery why a good, funny actor like Breckin Meyer is in it – unless it was to deliberately confound the people who said his career couldn’t sink lower than the Garfield films. Maybe he wanted to break his typecasting as a nice guy. If it was a favour to a friend, from the evidence on screen it was one reluctantly granted.

As a film school project, it would have been alright, but no one goes all the way to Bulgaria to make a film school project. My previous reviews show that I can usually find something good to say about anything, but I’m afraid I’ve nothing good to say about Stag Night. It disappoints at every turn. Of interest only to completists of the sub-genres to which it belongs.